When Herbs Fall Into Your Lap

My chiropractor is pretty awesome. She keeps my chronic neck pain at bay and keeps a welcoming, friendly practice. She also keeps an organic garden, growing a myriad of vegetables to use for cooking and canning. And she also grows herbs. During one of my sessions, in between her effective yet gentle adjustment of my spinal column, I happened to mention my indoor herb-growing project, and we bonded further over our appreciation for fresh, homegrown produce.

At my session last week, we were both inquiring into each other's growing projects. Sadly, I had to retell the demise of my little seedlings, but we both had a good laugh from the story. It just so happened though that she has a surplus of oregano and dill plants, and kindly offered some to me. Still not feeling quite ready to recommence the project, my thoughts tripped over each other trying to make a quick decision to her benevolent gesture. I'm not really sure if they ever arrived at a firm decision, but I found my mouth saying an autonomous, self-assured 'yes' anyway. I left my session with my spine aligned and the promise of new herbs to jump-start my growing project currently in abeyance.

With this impromptu adoption, I have some preparing to do. I've gone back to consult with my herb books on dill and oregano as well as looking up their profiles on this herb website, and nothing seems too terribly beyond a novice skill level. My chiropractor warned me that dill, unmanaged, can grow freakishly tall. And oregano; well, oregano seems like it might be pretty tame. More importantly than reading up on care, I need to purchase the proper substrate for these plants. I hadn't yet bought any soil for more mature herb plants: all I have on reserve is seedling soil. Actually, stike that. I DO have some soil that I bought for repotting a regular houseplant that had been blown off the sill by a very assertive wind. It's organic soil that was on sale for super cheap at Walgreen's and while it's just fine for a plant I don't plan on ingesting, I'll need to read the label more carefully to see if it's okay to use for crop-type plants. I don't see why it wouldn't be, but you never know. And finally, I need to prepare pots for these newcomers. Again, while I had coffee cans on reserve to use for transplanting once the seedlings were mature, I hadn't yet poked drainage holes in them; this shouldn't be too hard though: just need a good hammer and some nails. But believe it or not, I have neither of these lying around my apartment!

As I'm writing this entry, I feel refreshed and excited about these herbs unexpectedly breezing into my life. I'm particularly excited about cooking with fresh oregano, because I have never done so before. (If anyone has any favorite recipes using fresh oregano, please share!). I feel invigorated by the unending fluidity of this project: I like that what I planned isn't what has happened, and I like that I like it. There is something uniquely liberating about allowing life to present you with its offerings without filtering their merits through a thick, cheesecloth web of thought.

The moral of the story: When herbs fall into your lap, let them. And then worry about how they will grow.
Posted by Karnie at 5:45 PM No comments:

A is for Apotheke

I've really been missing writing about herbs, whether it be documenting the progress of my own or engaging in herb-inspired philosophical or spiritual musings. As I'm biding my time and waiting to start a new batch of seed after I return from a weekend sojourn in DC, I've been thinking of an herb-related topic to masticate with my mind's molars. And then it struck me: apothekes. Apothekes are akin to drug stores/pharmacies, but with one notable difference: the remedies sold are either homeopathic or herbal.

I know of apothekes from my Grandma, who is Austrian and lived through the Nazi occupation of Austria and WWII. As all grandmas do, she often tells stories of her childhood, reminiscing on times good and bad, and as one can imagine from her experience, the bad is often unbelievably horrid. Fear of the Gestapo coming for her family (her father was a political dissenter), air raids, the bombing of her house, friends killed, and witnessing the atrocities of concentration camps. But among these terrible memories were very fond, pre-occupation/war memories, that still endured despite the dark cloud that descended upon her childhood. And of course, she likes to speak of the good times more than the bad.

One such pleasant memory she likes to talk of is her time spent at her Grandfather's farm in the Austrian countryside during the summers. Here she could enjoy the fresh country air, play outdoors freely with her friends, and relish in unstructured time. But before she left her school in the city for the summer, she and her classmates were given an assignment: each student was presented with a list of herbs that they were to properly identify, collect, and bring back for the apotheke to use in his herbal remedies. When I first heard this story, I thought "What a delightful assignment for a young child!" It gets them outdoors during the summer months, fostering a kinship with their natural environment, and they are exercising and learning in the process (Austria is a very environmentally-conscious country, and I have to wonder if such practices as these served as the foundation for this national ethos). Additionally, it cultivates a cooperative spirit early on as well, with the children engaged in their community by helping out the local apotheke. At the time, I'm sure this calculated reasoning didn't drive the creation and implementation of the assignment, but in a nation plagued by disrespect toward the natural environment, crumbling social capital, and childhood obesity, we can appreciate the ingeniousness of this school- and community-based initiative and perhaps learn from its wisdom.

It is simply this particular story I wanted to share about apothekes. I know very little about apothekes otherwise--either of past or present--but they do still exist and are ubiquitous in Austria: instead of the the McDonald's golden arches, you see the signature stylized, crimson "A" denoting Apothekes. Whether or not schoolkids still collect herbs for the apothekes, I do not know, but they do still sell certain remedies my Grandma would speak of, including wermhut tea and a laxative made of condensed figs. I could kick myself that of all the 900 some pictures I took while is Austria, I didn't take a picture of the Apotheke sign, but I think ending this post with a picture of the country's landscape is more fitting anyway. 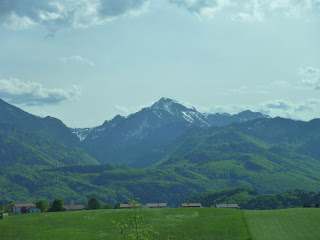