While I Was Away

I returned from a 2-week vacation to find my plants in an unfortunate state, despite arrangements for them to be looked after while I was gone. Before I left, the mint plant did have some signs of a disease that I think I properly identified as Powdery Mildew, and I had effectively removed the affected parts and restored the plant's health. But upon my return, it looked completely ravaged by it. The seedlings obviously were doing great, with no signs of wilting or any diseases, but sadly, they were pretty much shriveled beyond revival.

Initially I had planned on starting the growing project after I got back from my trip precisely because I was concerned about how they would hold up while I was gone. I'm not exactly sure why I decided to disregard my initial plan, but I think impatience had a large part to do with it. Impatience plus a blind optimism that the plants would undoubtedly (more like magically) endure suboptimal conditions. This was a tough lesson on trusting your instincts and honoring your initial reaction/plans.

Am I devastated? No. Just a little disappointed. I think subconsciously I knew that there was a very strong likelihood that they wouldn't survive my absence, so this shadowed anticipation perhaps helped to soften the blow.

Where will I go from here? I do plan on trying again after regrouping. However, I think I'll refrain from growing mint again, at least while I'm still getting my herb bearings. I knew going into the project that it was an aggressive plant, but it really did explode once I re-potted it, and I feel ill-equipped to keep up with its rapid growth. Additionally, given that it contracted this mildew-related disease, I'm not so sure the environmental conditions in my apartment are suited to growing mint.

In some ways, I view this first round akin to a pilot study. Even in my failure, knowledge and experience was procured which can now be applied to future endeavors. I am indeed looking forward to trying again. 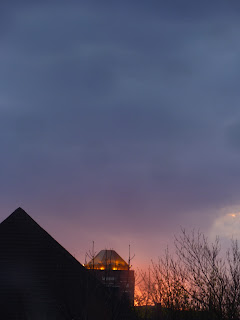 Posted by Karnie at 7:53 AM No comments: